An epic conflict between angels and demons.

A wise man once declared, ‘Demons exist whether we believe in them or not.’ Indeed, God and His angels exist whether we believe in them or not. In a morbid way, we all want the supernatural to exist. We crave stories of ghosts, hobgoblins, werewolves, vampires, and forest fairies. We delight in being frightened. We love the chills and thrills of a good ghost tale. But what we absolutely do not want is to encounter the paranormal in its raw evil form which may cause us harm. We desire supernatural experiences, but only on our own terms. Despite circumstantial evidence and extensive folklore, the creatures I’ve mentioned above probably do not exist, mainly because there are no universal origins from which their creation might ensue. But angels and demons? Well, that is a different matter altogether. – F. John Hurr, excerpted from the book, Light of the Damned.

Bill Myers, best-selling author of ‘Eli’ and ‘The Face of God’ wrote…

“A great book! An imaginative and well-written story of suspense and intrigue set in the land of the Red Dragon. Hurr gives us the most convincing spiritual warfare between angels and demons since Frank Peretti’s classic This Present Darkness.

This book is perfect for those who want to descend into the spiritual and supernatural world of warring angels and demons. The author’s 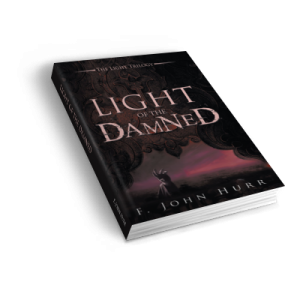 imaginative and graphic style of writing brings his characters to life so convincingly. So much so, that we should all give serious thought to the existence of an unseen spiritual realm. If you thought you knew all about the realm of angels and demons and the supernatural, then think again. Hurr’s book uniquely transports the reader into a totally convincing world where ordinary people, angels and demons enter into violent, life and death battles as evil forces attempt to usurp God’s kingdom on Earth.”

The quaint village of Penrhos Bay has become a central point for spiritual activity. Wicked and saintly. Lucifer’s minions are on a mission to not only destroy the town but to desecrate it from the inside out. And it’s starts with the villages well-known but highly inept spiritual leader, the Reverend Stannard.

Light of the Damned is a supernatural suspense novel that not only gives depth to it’s human characters, but the spiritual ones as well. The first chapter will have you hooked. If you’re a fan of paranormal, speculative thrillers and suspense, then this is a must read.

Kara will share more books and thoughts about faith and God’s unending mercy in bi-monthly posts on this site.